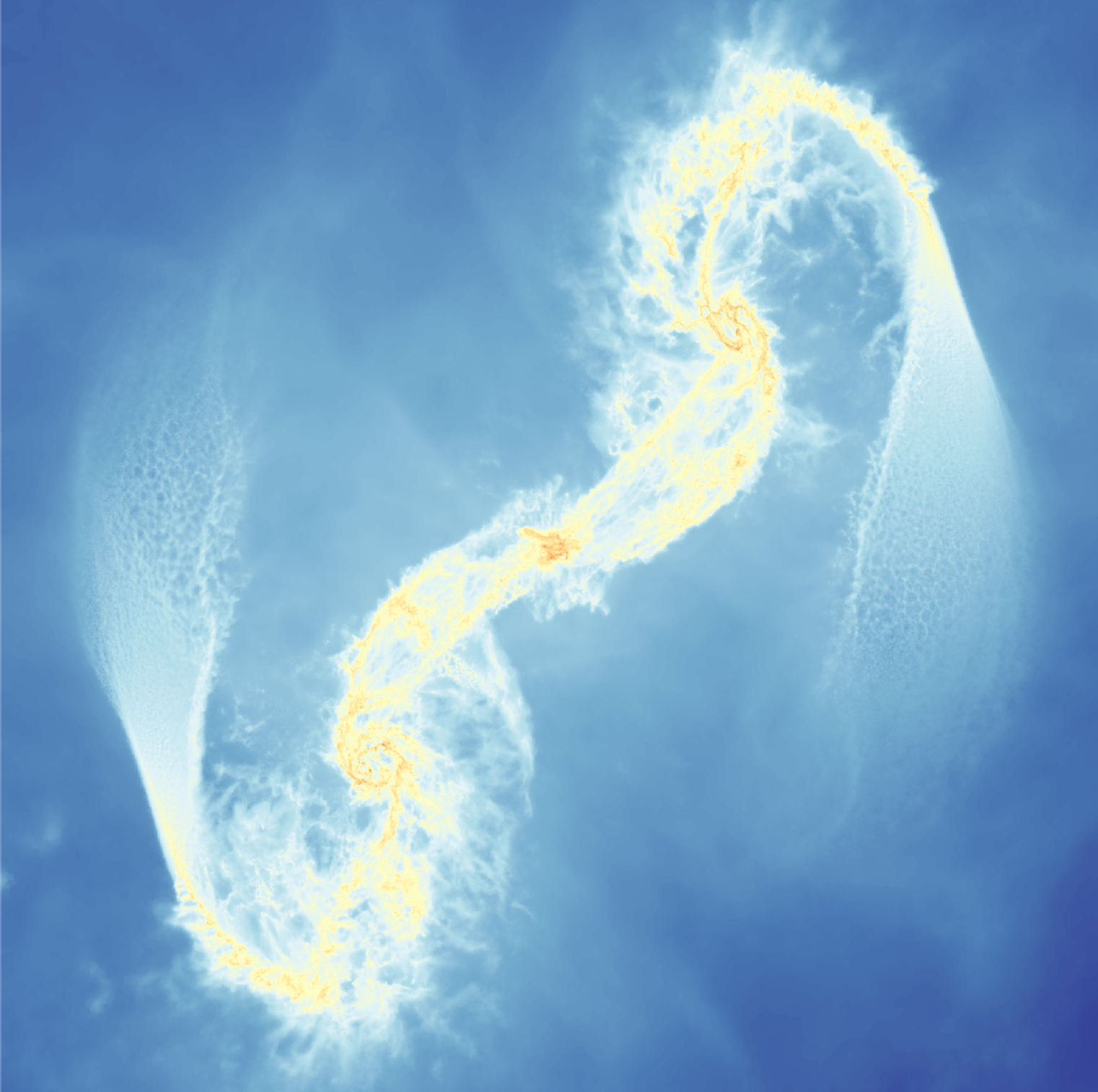 Using SMUGGLE in Arepo, I study how galaxy mergers affect the GMC populations and the formation of most massive star clusters. 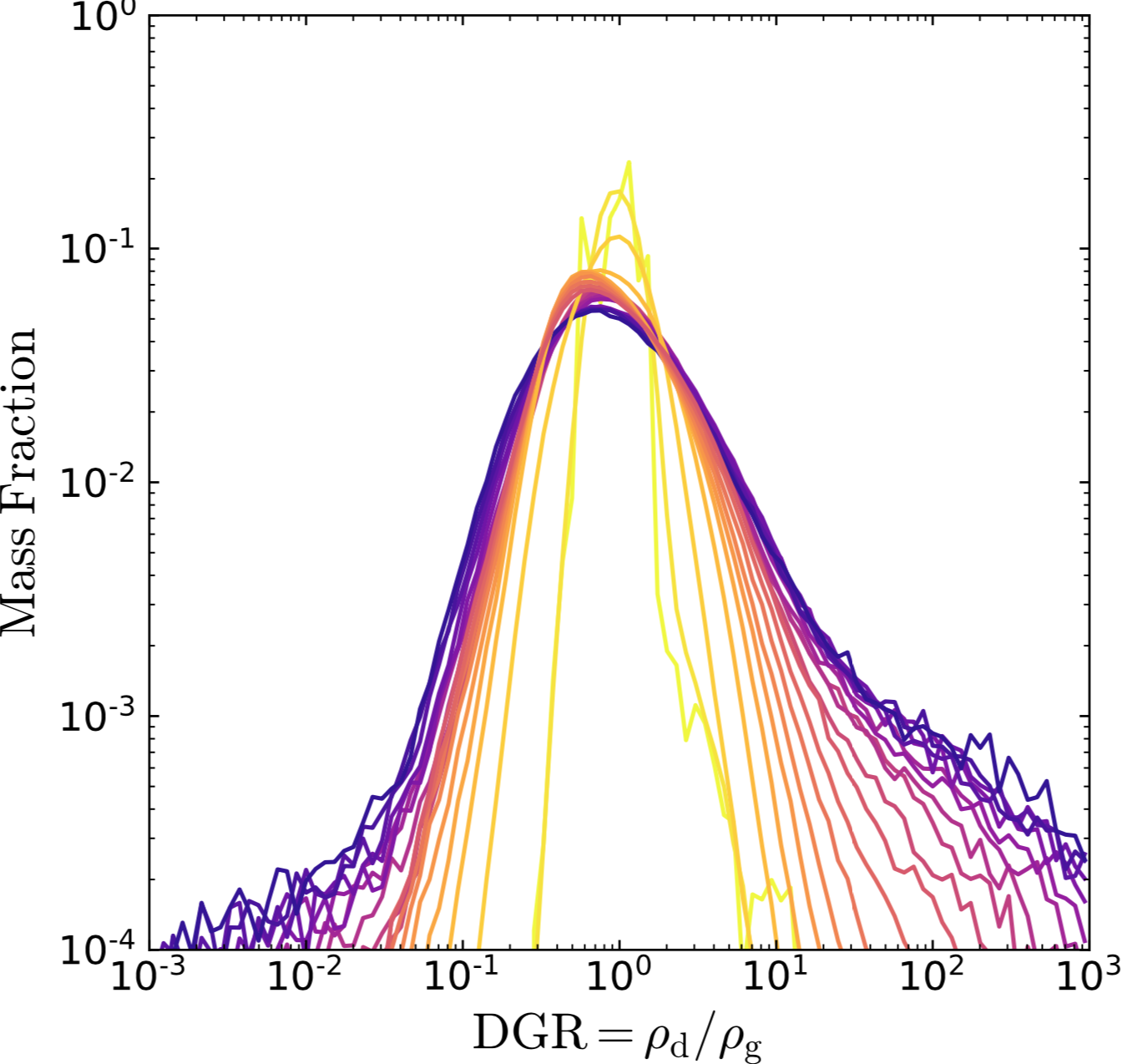 Using a "live-dust" implementation, I investigate how dust particles decouple from gas cells in turbulent clouds. After a few dynamical times, the cloud shows a broad range of dust-to-gas ratio in different regions, which strongly affects the effects of radiative pressure from massive stars onto the dust. 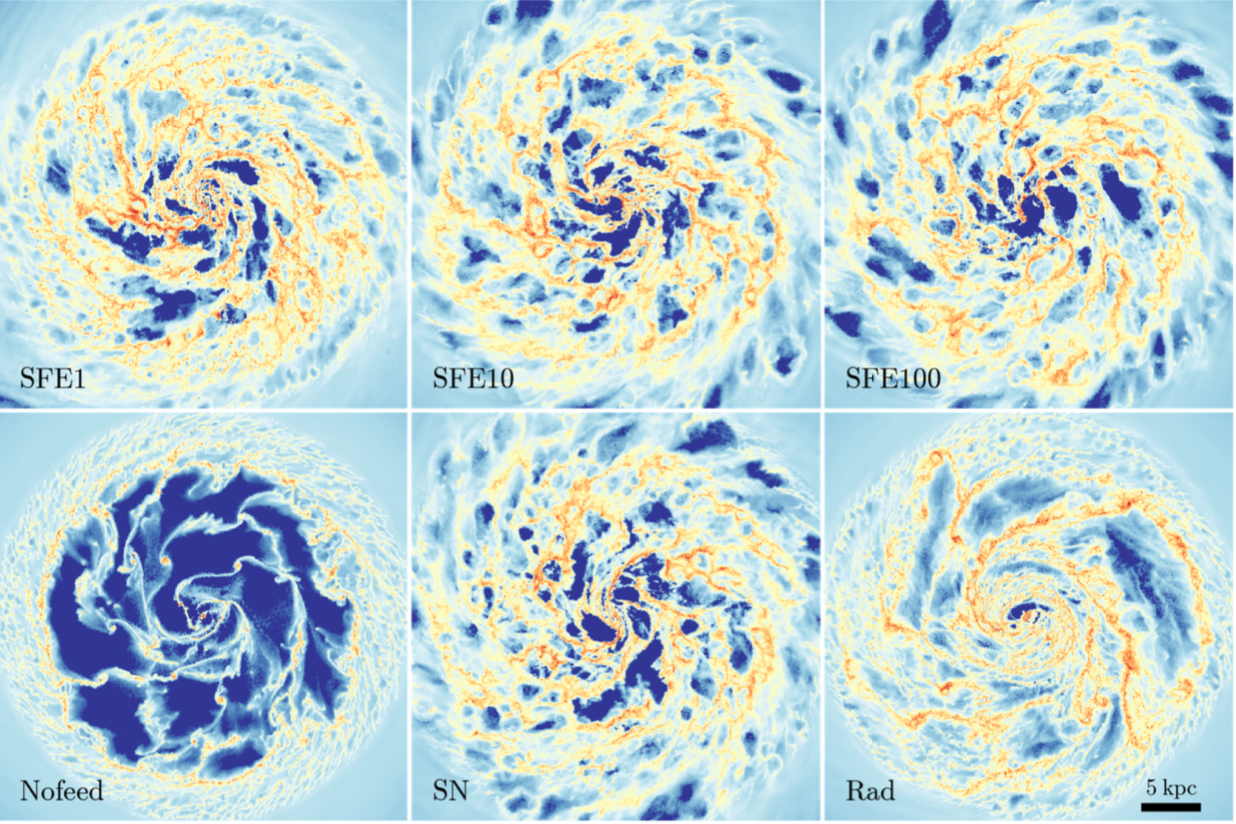 With several model variations of SMUGGLE, I investigate how different choices of subgrid physics in galaxy formation simulations affect the properties of GMCs. Both the mass function and the two-point correlation function of the spatial distribution of GMCs are sensitive to the subgrid models. Comparing the model GMCs and observations helps improve the design of next-generation cosmological simulations that aim to resolve the multiphase ISM. 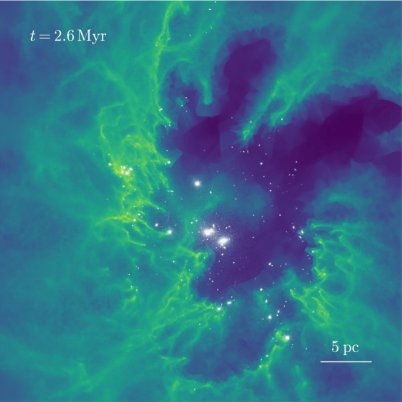 I study how integrated star formation efficiency depends on the properties of GMCs by performing a suite of simulations that cover a large range of GMC mass and size. I find that the efficiency depends strongly on the initial gas surface density of the clouds, which can be explained by a simple analytical model that considers a force balancing between gravity and stellar momentum feedback. I also derive a relationship between the boundness of the star clusters and the efficiency, which can be used to construct subgrid cluster formation models for simulations that cannot resolve individual star-forming regions. 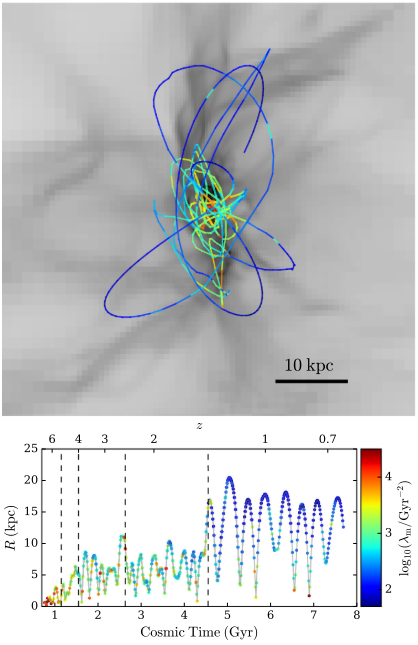 Formation and evolution of globular clusters in cosmological simulations

I present a novel approach to model the assembly of globular clusters across cosmic time. This is the first time that both the formation and evolution of globular clusters are modeled directly from the first-principle in cosmological simulations. As clusters orbiting around the galaxies, their subsequent dynamical evolution is traced by the time-varying tidal fields. I find that tidal disruption is extremely efficient during the first Gyr when the clusters are located inside the gaseous disk of the galaxies and becomes much less efficient when they are ejected to the halos. The mass loss due to tidal disruption transforms the power-law cluster initial mass functions to a log-normal shape, consistent with observations. My simulations predict a unique age-metallicity distribution of globular clusters for future observations. This work strongly supports the idea that globular clusters are just a population of surviving star clusters formed during normal star-forming events in high-z galaxies. No exotic model is needed to explain the origin of the globular cluster populations. 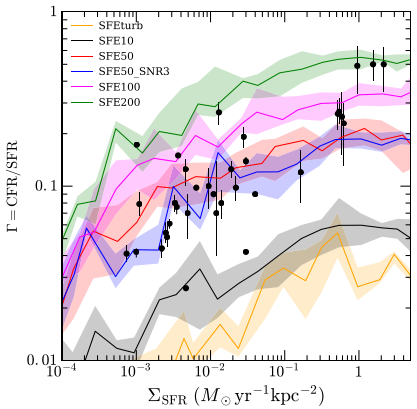 Testing galaxy formation models with the properties of star clusters

Following Li et al. 2017, I study the effects of star formation and stellar feedback models on the properties of young massive clusters formed in cosmological simulations. I find that, although the galactic properties do not change much with the local star formation efficiency used in the simulations, the properties of star clusters, such as the cluster initial mass functions and cluster formation efficiency, are very sensitive to the value of the efficiency. High efficiency is needed to reproduce the high-mass end of the mass function and the formation of most massive bound star clusters.

Star clusters as the unit of star formation in cosmological simulations

I design a novel star formation prescription for cosmological simulations, considering star clusters as the unit of star formation. Star particles are seeded at the density peaks of the gas disk and grow their mass via accretion from the ambient gas. It is demonstrated to be very successful on reproducing the star cluster mass functions and the short age spread. This innovative method is currently the only way of modeling the star cluster populations over cosmic time in cosmological simulations. 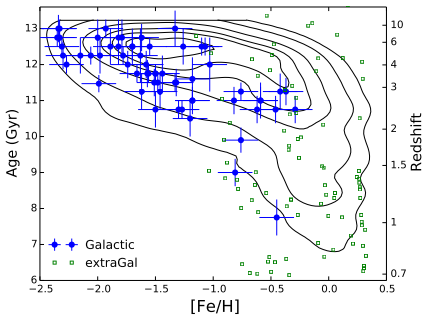 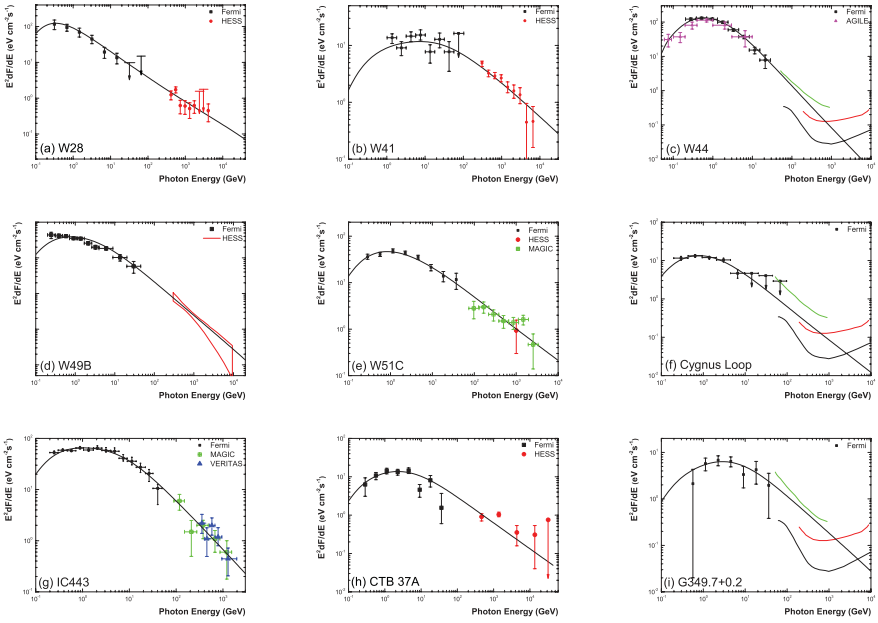 Using the accumulated diffusive model (Li et al. 2010), I calculate the #gamma-ray emission from nine middle-aged supernova remnants interacting with molecular clouds. The observed spectral features, such as the GeV platform and steep TeV power-law slopes, from all remnants are reproduced by this model, which unifies the origin of the #gamma-rays from this type of objects. 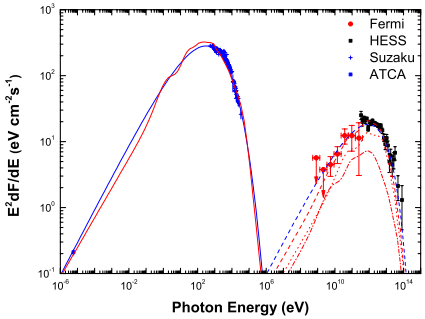 I design a new model that reverse-engineers the intrinsic relativistic electron spectrum from synchrotron X-ray emissions. I find that the inverse Compton emission from electrons alone is sufficient to explain the observed GeV and TeV flux from the supernova remnant RX J1713-3946. The work firmly settles down a long-standing debate on the nature of its #gamma-ray emission and rules out the hadronic models. 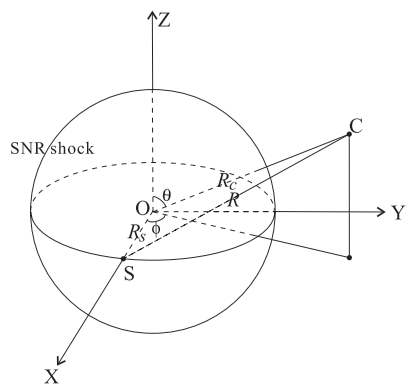 The propagation of cosmic ray protons after they are accelerated by the shocks of supernova remnants is the critical physical process to understand the nature of #gamma-rays in the Galaxy. Previous models consider this diffusion process by injecting cosmic rays, either impulsively or continuously, from a point source. In this work, I consider a more realistic case when the injection region is a spherical shell which expands over time based on the dynamical evolution of the supernova shocks. This model successfully reproduces the observed spectral shape of #gamma-rays from W28. I also explain the physical reason why W28 N and B are bright in both GeV and TeV, while W28 A and C are non-detectable in GeV. 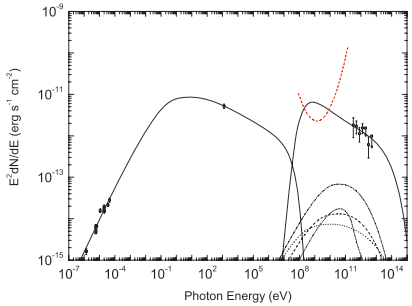 PWNe are efficient electron accelerators. However, whether they can accelerate hadrons are unknown. I build an analytical model to investigate the time-evolution of the non-thermal emission of PWNe. I find that relativistic electrons alone cannot reproduce the broadband spectra of G54.1+0.3, unless unphysical model parameters are required. A hybrid, lepto-hadronic origin of the #gamma-rays is preferred. I also predict that the Fermi-LAT telescope will detect GeV flux above the sensitivity in the future.